All products are certified and comply with the specifications 08.12.11-001-03270585-2017. We offer to learn more about the advantages of Yovskoye field olivine sand in "Products”

Environmental effect of the products

Quality certificate for olivine sand from the Yovskoye field

When using olivine sand absolutely eliminates the risk of professional disease of molders, the so-called silicosis!

The use of olivine sand will improve the metallurgical properties of pellets of your production:

Olivine sands are widely used in the world practice in the manufacture of cast iron (gray, high solidity and malleable) and steels of all types, especially manganese.Due to its basic chemical nature, olivine does not interact with manganese unlike quartz sand.The main characteristics make olivine sand ideal for the production of austenitic manganese steels.Olivine sand is also used for facing molding mixtures in the manufacture of large steel and iron castings, which allows them to be obtained with a cleaner surface than using quartz sand.The special advantage of olivine sand is manifested in the production of heavy castings, when resistance to high ferrostatic pressure is required, due to the slow and linear nature of volumetric changes (in contrast to quartz sand, which has a structural transformation at 575 °C).Olivine has no allotropic transformations, resistant to slagging with iron oxides. The sintering temperature of 1450 °C, begins to fuse at temperatures above 1760 °C and the melting point between 1800 and 1850 °C. 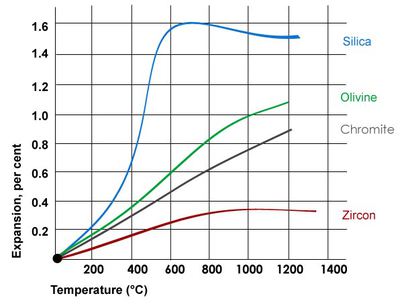 Fine-grained olivine sand is not wetted with liquid metal and has angular grains that provide a dense surface with low permeability.This makes it possible to use olivine sand in the manufacture of molds, rods and castings of non-ferrous alloys.

Olivine sand, as well as zirconium and chromite sand is used as a coating mixture. Due to the higher heat storage capacity, it has a higher heat removal rate, providing a local increase in the solidification rate.This is important to consider when there are thermal nodes in the casting and the temperature gradient reaches an undesirable peak.Olivine sand can be used in a mixture with chromite (approximately 50/50). The mixture can also be used to increase the rate of solidification in thermal units.Fine-grained olivine sand has the characteristics of non-wetting and angular shape of the grain, which provides a dense surface with low permeability of the metal.For this reason, olivine sand is also used in the manufacture of molds and rods and for castings of non-ferrous alloys (brass, bronze and aluminum), in cases where it is necessary to obtain a quality surface with minimal cleaning.

The angular form of the grains of olivine sand even allows for fine-grained sand in the intensification of the gasket to retain the gas-tightness, which is most important for elimination of gas defects in the casting.Low and constant thermal expansion allows to avoid linear defects in castings, as well as blockages caused by the destruction of the mold during pouring due to uneven heating (unlike forms of quartz sand), it reduces the amount of additives of compensating materials designed to reduce the effect of thermal expansion (organic additives), and as a consequence, the reduction of dimensional defects.